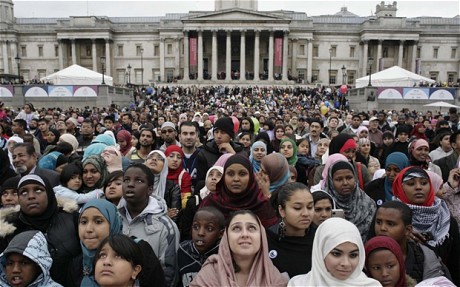 Indigenous British have been a minority in their own capital London since 2011, but instead of calling the sad state of affairs like it is, a British TV debate shows what happens when Whites are afraid to state the obvious fact that only the European people who inhabited the isle for millennia are indigenous to it.

Vox.com recently posted a video with a commentary by its contributor Amanda Taub (August 7) in which “Oxford-educated” journalist Mehdi Hasan presses professor Paul Collier to explain what he means by the observation that “in the 2011 census, it was revealed that the indigenous British had become a minority in their own capital.” The intention of the interview was to display Collier to the public as a racist for assuming that indigenous means “native born and white” rather than “just native born”.

Who Is an Indigenous Briton?

Hasan, born in England, pushes aggressively against Collier with the question: “Am I or am I not an indigenous Briton?” Is he, a brown Indian, any less indigenous to Britain than a white born native? His rationale is that native born Brits have not become a minority in London since many non-Whites counted as immigrants were actually born in Britain. Amanda, a human rights lawyer who believes that European nations must accept all the poor people of the world, gushes over the Indian’s questioning, entitling her article: “This 1-minute debate perfectly captures the shameful racism of anti-immigration arguments”.

Actually what this debate captures is a white male who has been cuckolded into denying the obvious fact that an indigenous Briton can only refer, at its core, to the historic people who founded England and inhabited this nation for centuries. If Collier had been confident enough of his race, of the racial foundation of the nation of Britain, he could have, as an educated person, made reference to the etymology of the word indigenous, which is an adjective derived, as Wikipedia explains, “from the two Ancient Greek words indo= endo/ “ενδό(ς)”, meaning inside/within, and genous= (γέννoυς), meaning birth/born and also race.” The meaning the word has today is not only “born within” but refers as well to a particular people “having a set of specific rights based on their historical ties to a particular territory, and their cultural or historical distinctiveness from other populations.”

In our cultural Marxist society, however, “indigenous” is now being used in two diametrically opposing, and very deceptive, ways:

Don’t expect this Indian to spend time over these subtle meanings; he is a typical opportunistic immigrant exploiting the ideology of cultural Marxism for his own ends. Without any sense of shame, this hypocrite identifies himself as an “Indian” in his Twitter account, at the same time as he acts offended when white Brits don’t view him as a native Brit.

Against would-be-educated leftists who like to say that Britain has seen many immigrant groups settling in, read Bryan Sykes’s book, Saxons, Vikings, and Celts: The Genetic Roots of Britain (2006), where it is stated:

We are an ancient people, and though the Isles have been the target of invasion and opposed settlement from abroad ever since Julius Caesar first stepped on to the shingle shores of Kent, these have barely scratched the topsoil of our deep-rooted ancestry.

The strongest genetic signal, the substructure, is Celtic, followed by Anglo Saxon, and some Viking traces; even Roman “genes are very rare in the Isles”. A recent study publish in Nature, The Fine-scale Genetic Structure of the British Population, supports this book, observing that the genetic composition of Britain hasn’t changed much since 600 AD.

One cannot compare the episodic migrations of genetically related people into England over many centuries with the current program of mass immigration from all over the world in the last few decades. What is transpiring in England today started in 1948 when the British Nationality Act affirmed the right of Commonwealth citizens (including those of newly independent Commonwealth countries like India) to settle in the United Kingdom. It was from this point on that non-white colonization started to increase steadily, so that by 2012 the proportion of white British had dropped from 87.5% of the population in 2001 to 80.5%.

Why Collier Lost the Debate

Collier should not have allowed this double-faced Indian any moral or intellectual posturings. Collier was clearly defeated in this debate. Not because he lacked the knowledge, as one could tell he knew how to distinguish true indigenous Brits from Pakistani gangs dedicated to the systematic raping of white British girls, but because he was hesitant to say without equivocation that an indigenous person is someone who has an ancestral and racial connection to Britain, which was totally a white nation, created by white Celts, Anglo-Saxons, and some Viking blood, rather than someone who arrived recently, or was born in Britain and has civic citizenship but has no deep ancestral links to Britain.

By the definition of the Indian, anyone who arrives in Britain and gets citizenship is as much a Brit as someone whose entire family and history is linked to Britain; even someone who is without citizenship but waiting for it, is potentially a British, or British in-waiting. The aggressiveness of the Indian was fed by the cuckoldry of the white man, and so he lost and looked pathetic. White men who hide from their race are cuckolds. It is one thing to be strategic as to when you can use racial terms, but in a situation like this there was no choice but to make a distinction between true indigenous people and non-indigenous, and, in the end, the white man implied it but in a wavering, weak way, so he lost, and was mentally castrated right in front of millions.

The Cockiness of In-Bred Moslem Immigrants

Hasan is typical among non-white immigrants residing in European lands who resent Whites for enticing them to inhabit lands with their superior ways. He is proud to say he is “Indian” but could never live in putrid, congested, and bacteria-infested India, and so the only card he has to play is to make the most of white ethnomasochistic tendencies by bragging how immigrant non-Whites are indigenous, when in truth they have contributed nothing significant to the history and culture of these lands. They love wearing titles such as “Oxford-educated” to advance their careers knowing that saying “Calcutta-educated” brings images of starvation rather than high learning, not to mention that universities were a creation of Europeans.

India is a caste society in which the least brown Indians are ranked at the top and the darkest ones at the bottom. Obsessed with color, a considerable proportion of the income the middle classes are earning now with the adoption of white technologies is being spent for skin-whitening products.

Hasan craves whiteness and he resents himself for it, so he lashes at any white who shows the slightest sense of pride. Obviously, the Europeans are the greatest people on the planet, the ones who achieved the most, accomplished by white hetero males. As Charles Murray and I have documented, 97% of the greatest accomplishments in the Sciences were by Europeans, 96% of the greatest philosophers were European, 95% (and this is a modest figure) of the greatest explorers, 100 percent of the classical composers — with similar percentages in all the fields of human knowledge and endeavor.

The Pathological Altruism of White Immigrationists

The other side of this resentful Indian is the completely pathological altruism many white females exhibit after reading a few books in our culturally Marxist universities, who believe they have a mandate to solve world poverty by bringing millions of poor Third Worlders into Europe. Read this passage from Amanda and tell me if this is not coming from someone who has no clue about history, economics, and is actually insane:

But what Collier refuses to acknowledge, as do many other anti-immigration activists and politicians, is that his demand that his country…keep out immigrants so as to “protect” its “indigenous” culture — means imposing enormous costs on people in other countries. It means, by limiting immigration, condemning people to lives of poverty simply because they had the bad luck to be born elsewhere. It means leaving the world’s most vulnerable people in peril, rather than allowing them to find safety as refugees. It means leaving them to drown in the Mediterranean lest a rescue encourage others to make the crossing. And, not for nothing, it means hurting rich countries, too, depriving them of the economic benefits that immigration brings. This is a morally depraved argument, made on behalf of a losing argument: Cultures change regardless of how much immigration those countries let in or don’t.

Amanda is a human rights lawyer, and so she embodies the argument I made in Natural Rights vs Human Rights about how the ideology of human rights is being used to transform the idea of civic national citizenship in European lands into human rights-bearing modes of membership for noncitizen immigrants, guest workers, refugees, and asylees. I am not going to debate her claim that low IQ Africans and inter-bred Muslims are an improvement to Europe’s culture and economy, there is massive documentation in the internet on these matters, which only pathological liars, or ethnic competitors with Whites, can deny.

I will say that Amanda is the one who is making a “morally depraved argument” in demanding that Europeans accept millions and millions from the population-bloated countries of sub-Sahara Africa despite the fact that this will inevitably bring an end to Europe’s cultural and ethnic identity forever. She is calling for the genocide of Europeans, plain and simple, and should be dealt with accordingly.