Confederate Flag Brought Down: The War on Our Symbols 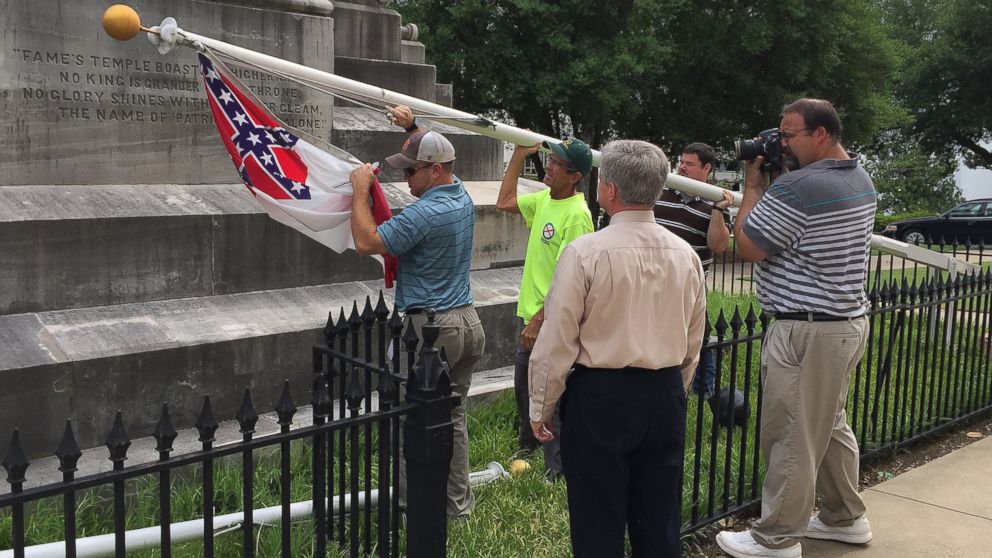 If you are a student of military history, you will know that the soldiers of any regular army would rather die than surrender their regimental colours. Roman legions, for example, went to great lengths to protect their gilded eagles and recover them if lost. The soldier who carried the standard was more important than any soldier in the field. The bottom line is that symbols are important. A flag is not just a piece of cloth, standards are not mere ornaments, and a monument or a temple or a cathedral is not simply a physical entity.

That is why those who wish to destroy you are intent upon eradicating your symbols. The Persians made a point of burning Greek temples as well as the cities that surrounded them, and in retaliation, Alexander the Great made a point of burning the palace of Persepolis. The Soviets tore down the New Reich Chancellery and toppled its bronze eagle. The criminal law of the Federal German Republic proscribed Nazi, neo-Nazi symbols as well as those of organizations deemed to be ‘racist’. The Taliban destroyed priceless Buddhist statues. In 1965 Canada’s parliamentary Quislings replaced the flag that Canadians fought and died under, the Red Ensign, with the Maple Leaf, the emblem of English Canada’s demise. And now the battle flag of the Confederacy is about to be removed from the South Carolina State House grounds. One state down — Mississippi, Alabama, Florida, Arkansas and Georgia to go. All Confederate imagery must be locked up in a museum, together with those who respect it.

But it won’t stop there. Social justice crusaders are on a roll, they smell blood and sense a rout. The Cultural Revolution is gathering steam. From the Donald Stern incident to Ferguson to Brooklyn to Charleston to the banishment of the Confederate flag, the enemy is picking up the pace. Get ready for the Reign of Fear. More ‘racists’ will be ‘outed’. More will be fired. More grovelling apologies will follow. More organizations will be targeted. More journalists will be blacklisted and marginalized. More on-line magazines like VDARE.com will lose their funding. The witch-hunt will switch into full gear. After all, there are ‘racists’ under every bed.

The Charleston shooting may eventually do for Cultural Marxists what the Reichstag fire did for the Nazis — provide a pretext for the total subjugation of potential opponents and recalcitrant reactionaries. It might prove to be the tipping point, a watershed. It was telling that the first demand of Charleston’s black leaders following the church massacre was that the Confederate flag had to go. One might recall that to signal the end of Imperial Germany, the Weimar Republic replaced the Imperial flag with the republican tricolor of black, red and gold. And to signal the advent of The Thousand Year Reich, the Weimar flag was replaced by the red, white a black Swastika flag. Yes, symbols are important.

What’s next? It has already been determined: The $10 bill will be altered to accommodate the image of a yet-to-be selected woman to co-exist with Alexander Hamilton, the first U.S. Secretary of the Treasury and architect of America’s financial system. The $20 bill will be altered in the same way for the same reason. As a Treasury spokesperson told the New York Times, the present Secretary of the Treasury Jack Lew was looking for a woman who was “a champion of our inclusive democracy”. Preferably an African-American woman like Harriet Tubman.

The “inclusive democracy” that Lew was referring to, however, is one that is obviously not inclusive of politically incorrect views or those who hold them. In fact, it is looking more and more like it will be a “Peoples” Democracy of the soft totalitarian kind.

Without our symbols, there is nothing to rally behind, no reference point to anchor our traditions. And when their symbols replace ours, it is a harbinger of much worse to come. You can bet on it.

There is a reason that Obama, in his immediate response to the Charleston shootings, chose to focus on the proliferation of guns in America. “Progressive” fascists instinctively know what libertarians know. The Second Amendment guarantees the First. In order to emasculate the First Amendment with impunity, the Second Amendment must be repealed or over-ridden. Before the Revolution can proceed at full steam ahead, the populace must first be rendered impotent. Take away their voice, take away their livelihoods, and take away their last resort.

Next on the hit list: the Internet. “Hateful” websites must be taken down. “Racists” and their hateful messages must be quarantined so that angry young men will not be inspired to act out their fantasies. Who will determine what is “hateful”? The government of course — acting on the “information” provided by that trusted and infallible watchdog, that multi-million dollar business, the Southern Poverty Law Centre (the Church of Morris Sleaze). If the SPLC can’t find a hate group, they can be relied upon to invent one.

The definition of “hate” will grow wider and wider as the frenzy to root out covert racists, sexists and homophobes grows in intensity. More and more will be caught in the net, victims of guilt-by-association. Allies will disavow allies and friends will distance themselves from friends, all in a desperate gambit to save their jobs and their precarious social standing. And Republicans will fall over each other trying to prove how progressive they are. Welcome to the one-party state. Scratch a conservative and you’ll find a Cultural Marxist. Scratch a Cultural Marxist and you’ll find a fascist.

Eventually, the Revolution will eat its own children. Those who earned a reputation as trail-blazers for the PC cause will be suddenly exposed as bigots and retroactively condemned. Liberals like Bill Maher will be shunned and denounced as conservatives, or summarily canned like Juan Williams. Those who cheered on the lynch party will themselves be lynched. All it will take will be one careless remark, one verbal misstep, one harmless joke. Who needs a Stasi when you have social media.

Leftists have no idea what forces they have unleashed. They sowed the wind. And they shall reap the whirlwind.