When China Came to Town: Multiculturalism’s Silent Journey to Monoculturalism 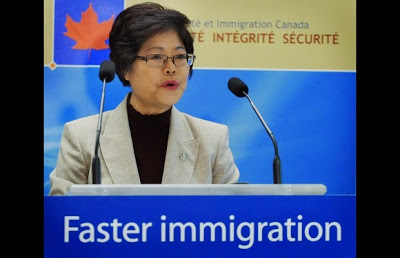 Meet Alice Wong. Alice is a Member of Parliament for Richmond B.C., Canada. In many respects, however, she is unlike the majority of Canadian politicians, at least for the present. Ms. Wong was elected by her Richmond constituents. Nothing unusual about that. Her salary is paid by Canadian tax payers — also a standard practice.

What is different about Alice, and a handful of others like her, is to be found in her dedication to a single country — the nation of China. She is a woman on a mission — a mission to inundate Canada with all-things-China. See Alice smile at a meeting with the communist government in Beijing. See Alice mingle at a Vancouver-based gala event celebrating China’s 65th anniversary. Witness Alice rub shoulders at yet another tax-payer funded event, the giant Chinese New Year celebration in Vancouver, B.C. Funny, while Canada’s traditional new year is but a one-day affair, Chinese New Year in Vancouver lasts for so long you would think it is a bi-annual event.

Since when did “multi-culturalism” become so mono-cultural? Does the term not suggest variety — as in a variety of Canada’s ethnic communities? Not for these folks it doesn’t. For these Canadian citizens and government employees, “multi” means China.

How did Canada arrive at this unusual political dynamic? The fact is, no one asked for multiculturalism in the first place. The Canadian public had no say in our government’s implementation of multicultural policy, or that of its close relative, immigration policy. Certainly, the nation of China does not embrace Canada in any kind of reciprocal manner. For example, China’s Ministry of Education announced this year that “no western cultural influence” will be allowed within their educational curriculum. Ironic, considering almost every major university in Canada has a well-funded, politically-active department of Asian Studies.

Regardless of how this phenomenon came about, one thing we know is that the movement is endorsed by Canada’s political elite. If it was not, the situation would not exist. Therefore, the responsibility reaches well beyond this curious breed of politician. Indeed, “non-ethnic” elected officials such as NDP Immigration critic Don Davies are also supporters of China’s agenda within our country.

Politics in Canada sure has changed since the days before mass immigration from Asia, not to mention the era previous to the Multicultural Act of 1988. Within our politically correct society, it seems it is perfectly acceptable for politicians like Ms.Wong to focus all their energies on one particular ethnic community — in this case, her own. Naturally, this involves supporting the nation from which these people came, but is this degree of mono-cultural focus fair to the general Canadian population?

The fact is, Alice Wong, Teresa Wat and other “identity-based” politicians are indulging in a serious case of political tunnel vision. It is a vision which excludes the needs, wants and rights of anyone outside their particular ethnic community. At present, that’s a lot of people. Indeed, it is the majority of the Canadian population.

It is rather telling that within a democratic nation like Canada, certain political leaders and organizations believe they have an inherent right to dedicate themselves to the political agenda of a foreign nation such as China. Vancouver-based Asia Pacific Foundation have for decades been using tax payer money to promote China’s geo-political interests within our nation. Michael Chan, Multicultural Minister of Ontario, seems to literally live and breath China. While Alice Wong was sipping champagne during China’s 65th anniversary celebration in Vancouver, Chan one-upped her by celebrating the occasion with Chinese government officials in Beijing.

Who authorized these people to transform multicultural policy into a testament to the glory of a single foreign nation? Most likely, the same people who authorized multicultural policy in the first place — no one! That is, except former prime minister Pierre Trudeau and a handful of other wishful thinking government leaders. What, pray tell, were they wishfully thinking? That somehow Canada would defy all historical precedents to become the world’s first multi-ethnic political utopia?

It didn’t happen, and it never will. What has truly resulted is an increasingly fragmented society headed for a cultural power struggle never before experienced in the history of our nation. Forget the war of 1812…this political phenomenon will ultimately dwarf that war, or any other.

Naturally, this is all well beyond the purview of our short-sighted, finance-oriented government institutions. Nonetheless, until this unprecedented situation is properly understood by the general Canadian population, Alice Wong, Teresa Wat and their ilk will continue to undermine our society by pushing for cultural and economic integration with China.

Do Canadians want such a thing? No, they do not — according to Asia Pacific Foundation’s own data. According to 2014 poll results, the Canadian public’s interest in engaging with China is at an all-time low. These facts, however, do not stop these people from pushing, lobbying and facilitating the availability of China’s money to our government, economy and educational institutions.

Does this sound like the behaviour of government leaders who value public opinion, or the will of the majority? It does not — for the simple reason that for Alice Wong, Teresa Wat and Michael Chan, democracy is nothing more than an instrument to get them elected. Once elected, public opinion and the will of the majority become meaningless. For them, it’s a China, China, China world, and make no mistake: they want this to be your world too.