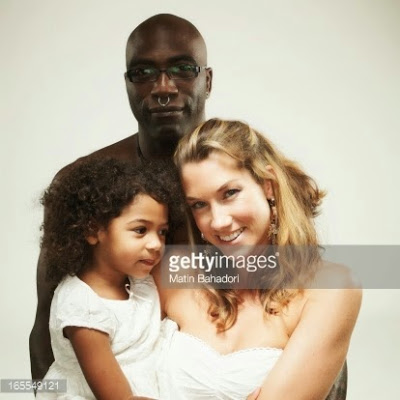 According to University of Toronto sociologist Shyon Baumann, there are too many white faces in Canadian ads, and he does not like it:

The media does have the power to shape our ideas about who people are. The media can reinforce cultural values that are already out there, so when we see commercials that feature characters that we are not used to seeing — a black family eating at a restaurant rather than a white family — little by little if we are exposed to those ideas over time, it broadens the idea of what is normal.

It was like sighting a Sasquatch or a flying saucer. I couldn’t believe my eyes. I was watching TV today when a commercial advertising “Sears Optical” eyeglasses appeared — get this — without any “people-of-colour”! Quick, somebody phone 911! Somebody contact the Hate Crimes department of the local police! Somebody file a complaint with the Human Rights Commission! Hurry!

What are people of colour who watch this Sears Optical commercial to think? What are their children to think? What are they to think if they don’t see themselves or people who look like themselves in each and every damn TV ad? They might feel that they don’t belong to this country. They might feel “excluded”. Unwanted. What a terrible thing to do to children! You can only imagine what this will do to their self-esteem.

Seriously, this Sears Optical commercial was conspicuous because it was exceptional. Typically almost all TV ads in Canada today use inter-racial settings to provide a trendy backdrop to sell products from cars to soap to coffee. You name it. In so doing, they offer viewers a lens to see the Canada they want us to see, a carefully manufactured multi-ethnic utopia where ethnic communities are meshing seamlessly. It’s a narrative of colour-blindness and cross-cultural congruity that is meant to flatter us. “See, Canada’s great experiment in multiculturalism is an outstanding success. Our model is working. Canada is the exception to the rule. We alone have discovered the secret formula of mixing oil and water. And these ads prove it. They’re a barometer of our progress.”

Thus “diversity advertising” is able to kill two birds with one stone by serving twin objectives. The first, obviously, is to broaden the company’s customer base. The second is to demonstrate corporate responsibility by “getting with the program” and falling into line with the national all-party agenda. “We aren’t just serving you, our customers, we are serving the country and its great cause. Look, even our employees are diverse. We walk the talk.”

Some Canadians — ‘rednecks’, ‘racists’, and ‘bigots’ — you know the type — might be seething with rage about all of this. They might think as I do. They don’t think that the appearance of non-white faces on television is objectionable because somehow skin colour is correlated with good or bad character. Nor do they believe that the people of colour who are depicted on the screen are less ‘Canadian’ than they are, or that they don’t deserve to be treated well or accorded the full rights of citizenship. No, that’s not it. That is not what makes them angry.

They’re angry because they believe that this ‘diversity-in-your-face’ strategy is deliberately designed to convey a clear message to Canadians of European origin: Traditional Canada, the Canada of two founding nations, the bicultural Canada, is history. It’s dead. And it’s never coming back. So get over it. Move on. And most of all, shut up.

Don’t get me wrong. I don’t have a problem with how people look, or that their genes are different from mine. As a matter of fact, two people in my family are non-white, and three are ‘half-caste’. No, that is not my problem.

My problem is what the proliferation of brown faces in new casts, parliament, talk shows and TV dramas reflect. It reflects the success of an agenda that was never put to a vote and for which no federal government ever had a mandate to pursue. The agenda of mass immigration and Official Multiculturalism. The agenda of cutting Canada from its European moorings by casting the immigration net across the world, of transforming what was once a largely bi-cultural country into a multicultural dog’s breakfast, of recruiting cheap labour from failed states, of packing our cities with more and more people who must squeeze tighter and tighter, while subdividing farmland to alleviate the pressure. The result? Higher density and sprawl at the same time. The worst of both worlds.

These “inclusive” TV commercials are a persistent reminder that we are losing our country, that we are the guinea pigs of a social engineering project that we never agreed to. Hapless victims of a game plan hatched many decades ago, before half of us were even born. Casualties of a disease that went largely undetected until its symptoms finally became obvious to all. Slowly, step by step, these commercials are conditioning us to accept that what we now see is normal, making what is to come less worrisome. In essence, they are setting us up for a future where Euro-Canadians will be marginalized in every major city of the country. Breaking us in and breaking us down.

The process has been insidious. No wonder so many of us were taken by surprise. No wonder that legislative changes and ideas that seemed harmless or trivial or even laudable at the time, once planted, took root and suddenly exploded across the landscape to envelop all of our institutions, like morning glory in the late spring. Even now, there are people in our own ethnic ranks who are mesmerized by its beautiful blossoms, unable to grasp that it is an invasive species that won’t quit until it has displaced all before it. It may be too late to stop its progress, or uproot the policies that fertilize it.

If that is the case, I don’t need TV commercials to rub more salt into my wounds. Thank you, Sears Optical, for your careless oversight. It was nice of you to give us a look into the rear-view mirror and see the Canada which we once knew and lost. The one that they want us to repudiate and forget.