Sydney Siege: How the Establishment Hosed Down White Reaction 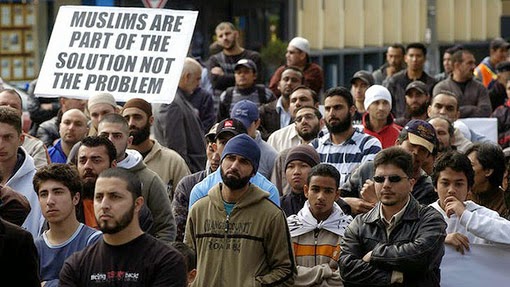 There are good reasons for Islamists to target Australia. We are a loyal ally of the U.S. and are presently bombing ISIS in Iraq and providing supplies to the Iraqi Army and the Kurds. And, of course, we participated in the invasions of Afghanistan and Iraq. Also Australia supports Israel. We lost about 100 people in the 2002 Bali bombing committed by an Islamic terrorist cell.

A striking feature of the siege in Sydney is the emphasis given by the political establishment to controlling public response to the attack.

Even before the terrorist began shooting hostages, the media and their academic experts were warning Australians that the attack had nothing to do with Islam or with multiculturalism or immigration. We were told that this event should not change our behaviour in any way. The morning after the killings had ended the siege, the same sources pointed out that the terrorist was an immigrant from Iran in 1996. We were told that the killer, 50-year-old Haron Monis, had no ISIS connection (true apparently), was deranged with a long criminal record, who was out on bail awaiting court. He was a lone wolf. That appears to be true but the establishment is wrong to deny any relevance to politics or Islam. Monis was a passionate Islamic activist recently converted from Shia to Sunni faith. Just three months ago Australian intelligence intercepted an ISIS directive to local supporters to behead a civilian in central Sydney and video the action for ISIS propaganda. The Federal Police broke up that conspiracy with a large scale operation. There are also a dozen Australian Arabs in jail for plotting terrorism in Australia.

So this is not an isolated event, as the MSM claim. It fits a pattern of the Arabic-Islamic population showing a relatively very high rate of separateness, difference, and hostility. It has been obvious for many years that Arab-Islamic immigration is a failed experiment. It is now costing lives. Politicians and commentators who have promoted Arab-Islamic immigration should apologize and then either reverse that stance or resign. They won’t do that, of course. The political system has been turned against the nation. Our present prime minister, Tony Abbott, stated last year that Islamic citizens are as Australian as Christians and Jews.

Many commentators defend the Islamic community, but not one voice represents the interests of White Australians

I watched television reporting of the event last night and from early this morning. There were many commentators and experts defending the Islamic community, but not one voice representing the interests of the remainder of Australians. One journalist made an isolated statement, not repeated, that investigators will now try to explain how the killer got into Australia. That is a good question that should have been the topic for extended treatment by experts and politicians.

No journalist has yet reported the anti-white animus of Tessa Kum, the television editor who coined the Twitter hashtag #illridewithyou that has become popular in Australia. An astute commentator, Chris Kenny, criticized the effort to demonize a potential anti-Muslim backlash but thought this was accidental. He failed to note the anti-white sentiment of Kum. It took Steve Sailer in America to discover Kum’s passionate hate-filled ravings against whites on her Facebook page. Kum borrows idea from the academic field of “whiteness studies”, itself an example of the anti-Western politicized social science to which our children are exposed.

The official response to the Islamist threat has been to clamp down on all Australians’ civil liberties, by making it easier, for example, for security agencies to gather metadata on internet use. Suspension of individuals freedom is sometimes justified in times of communal danger but it is shocking that no politician is talking about slowing the rate of Islamic immigration. Obviously the threat comes from that community, and lives are at risk. The government’s prime responsibility is to protect citizens. But it prefers to take away our liberties instead of using immigration policy to control and reduce the threat. That shows how powerful the pro-immigration and pro-multicultural forces are and how much they hate us.

Australia need an Anglo/white defense agency to do the job our controlled politicians fail to do.