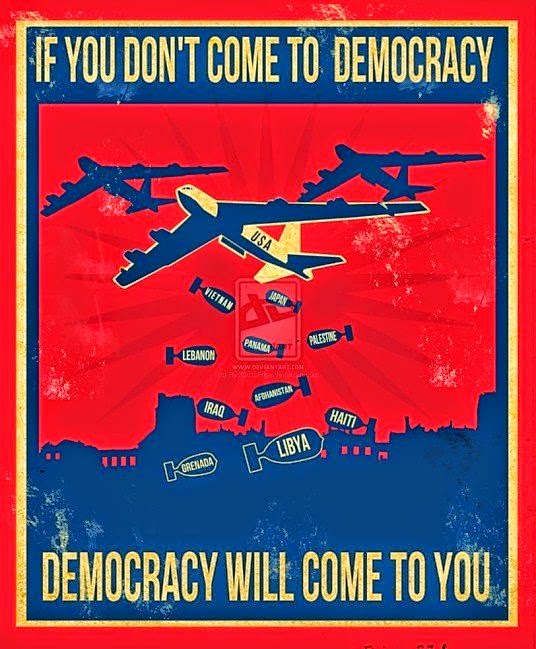 Pro-war in the Middle East

Bawer thinks America is the guiding light for the world, the bringer of liberty, and the “savior and protector” of Europe.1 To him, freedom through war is a central character trait of America throughout its history, something that Europe is lacking and would benefit from emulating. He thinks that Western military force will bring freedom and democracy to Muslim countries and thus, when Muslim immigrants come to the West, they will integrate easily. In other words, crushing Islamist tyranny and spreading liberal democracy by military intervention in the Middle East will neutralise the Islamist threat both at home and abroad.

Bawer is convinced that the War on Terror is successful, worthy, and justifiable as it makes free the “unfree” Islamic world. In fact, he believes that both the war in Iraq (2003) and the war in Afghanistan (2001- ) “were predicated on the assumption that Islam is compatible with democracy.” This ignorance is continued when Bawer arrogantly writes of American moral superiority:

Americans…really do believe in fighting for liberty, even the liberty of strangers in faraway places with names they can’t spell and languages they can’t speak a word of and cultures they find ridiculous. In their view, to defend other people’s freedom is to defend their own.2

Bawer is scathing of the overall European rejection of American and Israeli foreign policies and military intervention in the Muslim Middle East. While he appeals to Europe to help “America’s global supremacy” in the face of challenges from Islamism and China, he scorns Europe for its “love of peace and dialogue,” which he says has “seriously complicate[d] the effective prosecution of the war on terror.”3

Other than Islamists and Leftists, there is another group that presents an obstacle to Bawer’s wishes of American supremacy in Europe and across the globe: indigenous ethnic-pride European populist groups who want to end large-scale Third World immigration and who reject Americanism, Zionism, and multiculturalism (cultural Marxism).

For Bawer, the increasing popularity of populism in Europe could go two ways: liberal democracy or fascism. Of course, he hopes populism will lead to “a more democratic polity that placed liberty above multiculturalism.” He sees this in particular Liberal Right-leaning types of people, who he calls “the liberal resistance – a hodgepodge of writers, politicians, and activists,” namely those who are pro-liberty and equality, pro-America, pro-Israel, and against the Islamisation of Europe, such as Pim Fortuyn, Theo van Gogh, Ayaan Hirsi Ali, and Lars Hedegaard. Although European leftists have branded this “liberal resistance” fascist and racist for their stern policies that target Islam these are labels that Bawer refutes with zeal.4

Liberal right wing populist groups are acceptable to Bawer due to their “tolerance,” which is “familiar to Americans.” He admires them because they are not against immigration and miscegenation, are not for the repatriation of Muslims, and do not defend and promote the national ethnic identity of Europeans, but instead defend continued large-scale immigration and policies of “education, emancipation, and integration,” and have respect for democracy, secularity, freedom of expression, equality of women, sexual minority rights, and individual rights.5

In contrast, right wing populist groups that deal with issues of Islamism but want to also preserve aspects of the Old World order in Europe, such as the British National Party (BNP), Vlaams Belang (Belgium), National Front (France), the Freedom Party (Austria), and the National Party (Germany), are to Bawer truly “fascistic groups” because they are “fixated on racial, ethnic, and cultural identity.” For example, Bawer asserts that the ethnonationalist BNP is “an explicitly racist group that…also opposes mixed-race marriages, has had associations with neo-Nazi groups, and requires members to be of British (or ‘closely kindred’) stock” and this is just “[n]ot a pretty picture.”6

So we see, for Leftists and Neocons alike, populist groups that emphasise the importance of ethnic identity are truly fascistic. In reality, these non-liberal populist groups are obstacles to Bawer’s American quest for monocultural hegemony in Europe.

European Nativism is Anti-Semitic and an Obstacle to American Hegemony

Bawer observes that Europe has a history of relative ethnic and cultural homogeneity and is much more “traditionalist and nativist” than America; “tribal customs predominate.”7 Yet, for him, these nativist traditions and tribal-like European identities are hindrances to American global supremacy.

While he bemoans the weak identity of the sleeping brainwashed Europeans in the face of Islamism, Bawer fears those Whites who seek to preserve their distinct ethnic identity in the face not just of Islamism, but other pertinent issues too, such as rising demographics of immigrant groups, PC Leftism, and American hegemony. In fact, Bawer has a problem with any group or individual that is not pro-American, pro-Israel, pro-military intervention in the Middle East, pro-assimilation, or pro-immigration: if you do not ascribe to any of these descriptors you are either a Leftist idiot, an Islamist, or an anti-Semitic neo-Nazi fascist.

The anti-Semitic history of Europe and the rise of neo-Nazism makes Bawer worry that “many Europeans…[will] respond to the looming Islamist fascism in their midst with fascism of their own.” He writes, Europe has had a “long history of anti-Semitism,” and Nazi anti-Semitism “was the culmination of centuries of Jew-hatred rooted in the European preoccupation with ethnic identity as the basis of cultural identity.” So the “resurgent right-wing nationalism” witnessed today in Europe is “of a kind that had not been seen since the defeat of Hitler.” He fears that the populist parties that are not already “far-right, racist, or xenophobic” may “easily move in that direction” as the crisis in Europe “deepened.”8

Quite simply, Bawer dreads indigenous Europeans promoting their ethnically distinct identities and collective belonging as a protective measure against encroaching enemies because he associates a strong European ethnic identity with anti-Semitism. Bawer not only fears ‘fascist’ Europeans embracing their ethnic identity but also fears anti-American European Leftists and Islamists. For him, Europe must stop the Leftist-enabled tide of Islamism by adopting the American strategies of assimilation, liberal individual rights, and neoconservative foreign policy and must prevent White nationalists rising in response to mass-immigration and Islamism, otherwise these fascistic elements will lead to a new era of anti-Semitism in Europe.

He thinks the only solution to Leftism, Fascism, and Islamism is for Europe to become more secular and liberal democratic and emulate America in every single way. European economics, immigration, integration, foreign policies, racial relations, cultural practices, militaristic strength and prowess, national identity, and rights – all need to align with American models. Ethnic national identities and collective rights of minorities must be replaced by individual rights and ethnically impartial identities. And Europe should aid American hegemony by adopting its mission of spreading a universal monoculture of American-style morals and values of freedom and democracy by military means if necessary.

Bawer essentially denies the sovereignty of European peoples by condemning their ethnic identities, advocating mass-immigration, and suggesting that the only viable solution to Leftism and Islamism in Europe is American-style liberal democracy, melting pot multiculturalism, and neoconservative foreign policy. Therefore, Bawer is a supremacist ideologue of American-style race-mixed monoculturalism and an enemy of European heritage, pride, and ethnic diversity.