The Islamization of the Teaching of Western Civilization 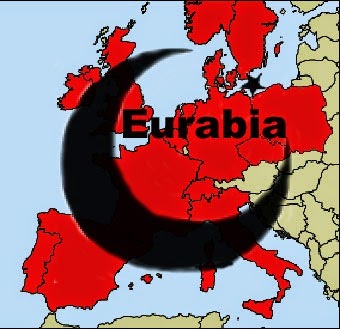 In the United States today only two percent of colleges offer Western Civilization as a course requirement. I teach Western Civ in two parts, but they are not required, and I had to change the title to “Sociology of Western Civilization” for approval. Since I decided to teach this subject ten years ago, I have detected in new texts, and in newer editions of older texts, a growing emphasis on Islam in their narration of the cultural history of the West.

A well-established older text is The Western Heritage, by Donald Kagan, Steven Ozment, and Frank Turner. This is a relatively conservative text by the standards of today. I have the tenth edition at hand, published in 2010 (a new 11th edition has just come out). I can’t say when this text began to include sections on “the Western debt to Islam”, cute captions on topics such as “European Embrace of a Black Saint” or an alleged “Multicultural Book Cover” from Carolingian times. But it is clear that the 2010 edition, in comparison to the first editions, with the first going back to 1979, has felt the impact of political correctness. The Wikipedia entry on the first edition(s) of this text observes:

Considered conservative and old-fashioned when it was published, reviewers chided it for ignoring the Byzantines and Ottomans as well as giving short shrift to Russia and Poland. Others indicated lack of attention to the role of the Islamic states and ignorance of Islamic sources.

But now in stark contrast it is clearly stated in the Preface that a new feature of the 10th edition is a greater emphasis on the West’s connections to the rest of the world, with a series of comparative essays added at various points in the text under the general heading of “The West & the World”. There is nothing wrong with this per se. Students should learn about the West’s connections with the world. But something else is going on here. Without getting into details, older editions did not neglect these connections; the difference now is that academics who still teach the West — as this course has been replaced by more loving histories for Us All — feel that they can only justify the teaching of the West as long as they frame its history as an inclusive affair in which all the peoples of the world participated.

Most of the Preface reads like an effort to placate those who think that the West should no longer be taught. They are not calling for an end to the teaching of Western civilization; they are right wing liberals who believe that the West represents the first magnificent example of a civilization that speaks for humanity. The Preface notes:

Students reading this book come from a variety of cultures and experiences. They live in a world of highly interconnected economies and instant communication between cultures. In this emerging multicultural society it seems both appropriate and necessary to recognize how Western civilization has throughout its history interacted with other cultures, both influencing and being influenced by them. For this reason, we have introduced in this edition a new chapter on the nineteenth-century European age of imperialism. Further examples of Western interaction with other parts of the world, such as with Islam, appear throughout the text (xxii).

The Cultures of the West Textbook

Nevertheless, Western Heritage is still a very good text. It is the textbooks being published in current times that show the full impact of multicultural correctness. A recent text is Clifford Backman’s The Cultures of the West: A History, first published in 2013. This two-volume text calls for the inclusion of the Islamic world in the West:

This book overtly…insists on including the region of the Middle East in the general narrative, as a permanent constitutive element of the Greater West. For all its current appeal, Islam is essentially a Western religion, after all…To treat the Muslim world as an occasional sideshow on the long march to western European and American world leadership is to falsify the record and to get the history wrong (xxii).

Check its front cover here. What justifications Backman offers for the “Greater West”? To students already accustomed to diversity and wobbly images about connectedness, he says that the “European world and the Middle Eastern world have been in continuous relationship for millennia”. World historians, of course, follow this idea to its logical end: Europe is a continent connected to Asia, and the history of the Middle East and Asia constitute an amalgam of many cultures and civilizations, all of which have been in continuous relation with each other and with Africa, and with the Americas after 1500; therefore, a proper understanding of the history of the West requires a history of the whole world.

But Backman is a modest man seeking fairness in a world of extremes, he believes that it is possible to teach a course in Western Civ as long as this civilization is conceived as “the Greater West”, which, I might add, includes not just the Near East but Muslim India and Muslim Africa. He thinks this “Greater West” is justified on the grounds that

nearly every one of the fundamental turning points in European history…have been experienced jointly by the European and Middle Eastern societies (xxii).

This is a falsification of the historical record. Nowhere in Backman’s textbook do we find a substantive argument supporting this claim. For one, there is no way round the fact that the classical Greek invention of deductive reasoning, disciplined infantry warfare, invention of prose writing, analytic historical writing, discovery of the mind, the literary forms of tragedy and comedy, and citizenship politics were achieved when Islam was not in existence, and so was the Hellenistic revolution in scientific knowledge, the Roman invention of the legal persona, continuation of republican institutions, and numerous novelties in warfare and engineering. The Muslims played a role in retaining, commenting, and advancing some of the works of the classical Greeks from about the 8th century until 1200, but thereafter every single turning point in European history was accomplished by Europeans.

Volume 2, which is three times the length of Volume 1, commences with the “Renaissances and Reformations”, pluralizing these two terms so as to give the impression that there were renaissances and reformations in the Middle East and North Africa. But since Backman cannot marshal a single argument demonstrating any degree of Muslim responsibility for these turning points, he is compelled to create separate sections for the Muslim world with bits of information about trade connections and European impacts on this world, as well as events in this world, none of which can be framed, however, in terms of anything that could reasonably be called a renaissance or a reformation.

The net result of making space in the text for events outside Europe is the diminution and suppression of key formative events, intellectual figures, and even whole epochs in the making of the actual West. He leaves out all the great artists of Renaissance Italy: Leonardo da Vinci, Michelangelo, Raphael, Donatello, Botticelli, to name a few. There is nothing about how Italian merchants created modern double-entry accounting.

In separate sections, he tries to create the impression that Muslims were at the forefront of modernity; for example, in the championing of the rights of women (807). We are supposed to have a picture of Muslim co-participation in the Industrial Revolution simply on the strength of the eventual adoption by a Muslim country of techniques invented in Europe. Forget that not a single technology of this revolution is shown to have been invented in the Muslim world.

Students are actually made to think that if there was any opposition to modernity it came from the nasty Catholics. In a section, “The War on Modernism”, Backman writes:

To many in the broader Western society, the [Catholic] church’s war on modernism seemed a painful embarrassment, not merely a flat-out inability to understand modern scientific and textual thinking but a petulant refusal by pious ideologues to think or to allow others to do so (773).

This description actually applies to Backman. It is well known in the narrow circles of medieval scholarship that the Catholic Church played a crucial role in the development of Western modernity starting in the Middle Ages, as Thomas Woods explains in How the Catholic Church Built Western Civilization, Rodney Stark in Victory of Reason: How Christianity Led to Freedom, Capitalism and Western Success, and Edward Grant in The Foundations of Modern Science in the Middle Ages. In the words of J. L. Heilbron of the University of California, Berkeley:

[The] Roman Catholic Church gave more financial aid and social support to the study of astronomy over six centuries, from the recovery of ancient learning during the late Middle Ages into the Enlightenment, than any other, and probably, all other institutions.

Yet, Backman, an expert in medieval European history, though the “social history” type, ignores this literature. He acknowledges that “few of the advances and discoveries of the 19th century made much of an impact in the Islamic world”, but then asks his students to show sympathy for Muslims and disapproval of Europeans:

[Muslim] opposition was not merely a knee-jerk rejection of innovative thinking. Rather it was a rejection of European political imperialism (779).

In the introduction Backman portrays himself as an edgy professor willing to rock the boat, a man with a peculiar talent for “eccentric” ideas, a dissident in a world of conformity; in short, the one and only proponent of the “Greater West”. The truth is that this idea has been in the air for some time, proposed by Ian Morris in Why the West Rules — For Now, by many advocates in the West (and the Islamic world) of an “Islamo-Christian Civilization”.

As I explained at length in a two-part paper (part I and part II), the idea that Europe’s history has to be seen in connection to the rest of the world cannot be divorced from the political promotion of the colonization of Europe by non-Europeans through mass immigration and indoctrination. This political agenda is being pursued by all the established parties and institutions. Backman is another pawn pushing in the same direction. Deep down he knows it is about politics, and says as much in the concluding pages of his text dealing with Europe after 2001. “To center Western identity on Christianity is just bad politics.” Why? Because “the Western world is increasingly Muslim” (1154).

Good politics equals the rewriting of the history of the West so as to justify the current reality of Muslim mass immigration. It does not matter that the historical evidence invalidates the concept of a “Greater West”; students must be made to believe in this concept; they must accept the current Third World colonization of their homelands. “We have often forgotten that Islam has been a Western religion from the start” (1156). From the start? There was no Islam in the Middle East through the entire epoch of classical Greece, Hellenistic times, the long reign of Rome, and the first centuries of the Middle Ages. Historical veracity is not the issue. The goal is to create students who will view an increasingly Muslim Europe as a natural phenomenon consistent with the past.

Will these students, then, see the Rotherham rapes as a “Western” problem committed by ethnic groups that were British “from the start”?