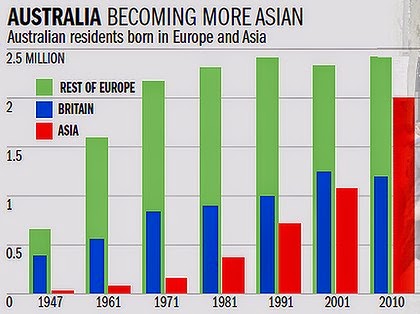 In trying to understand why Australia’s political leaders seem intent on ethnically transforming one of the world’s most stable, peaceful and prosperous nations I have suggested that this indicates hostility on the part of the country’s cultural elite. This has been evident for decades in the media and universities.1 To understand what has caused this animus it is necessary first to describe its expression.

A new example comes in The Weekend Australian (20-21 Sept. 2014, p. 20) from veteran journalist and commentator Greg Sheridan, who describes the “supplanting” of the historic Anglo-Australian nation by Asian immigration beginning about 40 years ago, in the late 1970s. “[T]he racial and ethnic identity of Australia has been completely transformed.” This is not something Sheridan regrets; he celebrates it. The thing that swept away Anglo Australia was Asian immigration, Sheridan explains, and “[a]lmost nothing in Australian history has been as successful as Asian immigration.” It seems Sheridan has no emotional connection to the old Australia, which still accounts for a majority of the population, the national culture, its political and judicial system, its core Christian heritage, science and technology and market economics. (Obviously Anglo Australia is very much alive, though wounded. Perhaps Sheridan is not describing but wishing.)

So indifferent is Sheridan towards the Australia of his birth and rearing that he adopts a clinical stance towards it. He admits, without remorse, that Anglo Australia has undergone a “benign cultural genocide.” Anglo Australia “is gone forever.” He even consents that “[i]t was not a bad race and it produced a good culture.” It was an identity that animated Australia’s leaders, including John Curtin and Robert Menzies. Sheridan remarks that Anglo Australia has been displaced by other ethnicities and cultures, and “I don’t feel at all unhappy about that because race and ethnicity are the least interesting or important things about a person. It is the contents of their character that counts.” Incongruously, despite this cosmopolitan, Martin-Luther-King stance towards group identity, Sheridan explains that from his earliest journalism he advocated mass Asian immigration. Could this be a Freudian slip? The cosmopolitan policy would be to remove ethnicity as a criterion for choosing immigrants, but Sheridan says he supported Asian immigration. That reflects ethnic, not post-ethnic, motivation.

More seriously, “genocide” means deliberate human agency. Genocide is not just cultural or demographic change but destructive change imposed on a people or part of it on account of their identity. The 1948 UN definition of genocide sets out five meanings, all of which begin with words implying deliberate human agency: killing, causing, deliberately inflicting, imposing, and forcibly transferring. The UN considers attacks on a people’s culture to be evidence of intent “to destroy in whole or in part” and therefore a risk factor.

The destruction of or attacks on cultural and religious property and symbols of the targeted group that may be designed to annihilate the historic presence of the group or groups.2

As a leading intellectual and a senior wordsmith by trade, Sheridan must know that genocide entails deliberateness. Combined with his long-term support for specifically Asian immigration it is inescapable that Sheridan sees himself as an agent of the cultural destruction of the historic Australian nation. Certainly he sees this type of genocide as benign but he does not offer a plausible explanation for how that adjective applies to the supplanting of a thriving nation that he admits was not bad and bore a good culture. His remark that ethnic identity is of little value also needs to be examined. Does he apply the same standard to all nations?

The context of these views also sheds light on Sheridan’s remorseless dissection of the rotting laboratory specimen he takes white Australia to be. The above quotes are taken from an article by Sheridan criticising the proposal to recognise indigenous Australians in the Constitution. His central argument is that doing so risks altering citizenship, the civic institution that has allowed the peaceful supplanting of Anglo Australia. It would be the “height of folly” to trifle with such a successful institution by bringing ethnic identity into the Constitution. In other words, nothing must stand in the way of multiculturalism and the replacement of white Australia that it entails, including recognition of Aboriginal Australians.

Remarkably Greg Sheridan is considered a conservative in Australian politics. His anti-communism and support for the American alliance fit this description. But his attitude towards Australia’s identity resembles Trotskyism. This combination of moderation in most things except the survival of his nation challenges explanation. Whatever his subjective outlook, he is objectively an Anglo-Celtic Australian by culture, homeland, race and religion. He has a large stake in the continuity of that nation. From an evolutionary perspective it is adaptive to defend one’s family and tribe and that is what people have done around the world, until the rise of far-left ideologies in the late nineteenth century. But Sheridan is meant to be a conservative. It would be fascinating and important to discover what motivates a moderate intellectual to promote the “benign cultural genocide” of his own people.

Understanding just a few such leading advocates of Australia’s ethnic transformation will help explain how a manifestly undemocratic and aggressive policy has been so successful. To that end we need to understand how individuals such as Sheridan made their careers in the media, in his case with the Murdoch empire; how it is that their colleagues tolerated or supported them; their own ethnic attachments; the significant influences on their thinking; and the source of their extraordinary confidence despite evincing morally dubious beliefs. Especially it is necessary to understand their ethnic motivations. For casually accepting the cultural genocide of a nation, as Sheridan does, is not expected from a neutral cosmopolitan. It is the sort of attitude one expects from someone with an ethnic axe to grind.

Sheridan is not alone in his view. Elsewhere I recorded Malcolm Fraser’s damning remark that Anglo Saxon Australia “is dead,” and suggested that this indicates coldness if not hostility. Fraser, one of the founders of Australian multiculturalism and replacement-level Asian immigration, has never been so insensitive as to describe assimilation of immigrant ethnic groups as constituting the death of their identities.

Disparaging pre-Second World War Australia as a “narrow, Anglo-Saxon society”3 and declaring “Anglo-Saxon Australia is dead”4 does not reflect empathy for Australia’s founding people and core national identity. In his autobiography Fraser expressed suspicion about his fellow Australians when he insisted that they must not be consulted in setting immigration policy. The same man who campaigned for majority rule in Rhodesia and South Africa thought that Australians did not qualify to make a democratic choice of their demographic future. He thought it legitimate for governments to force immigration from anywhere against Australians’ will because, he argued, they would come to accept the decision sooner or later.5

From time to time other members of Australia’s hostile elite will be examined in Human Nature News.