Virtue in a Jack-Boot: Anthony Browne on Political Correctness 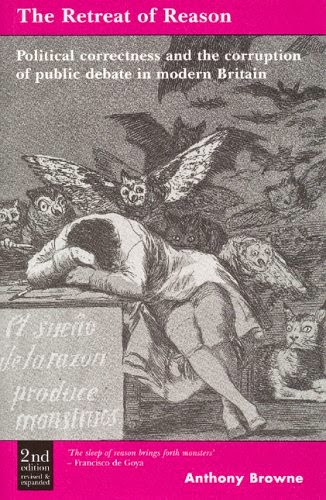 Anthony Browne’s The Retreat of Reason: Political Correctness and the Corruption of Public Debate in Modern Britain is just one of a long litany of books written about the scourge of left-wing McCarthyism that has seized control of every important institution in the Anglophone world. Nevertheless the subject is of such critical importance that it deserves re-iteration and Browne’s polemic is argued concisely and persuasively. While his examples are primarily British, Canadians, Australians and Americans will quickly identify with the malaise he describes.

Political correctness has been defined as a neo-puritanism that attempts to save souls through language, an Orwellian quest to eliminate thoughts by prohibiting certain words, a cultural Marxism that challenges prevailing culture and power. For Browne it is simply

an ideology that classifies certain groups of people as victims in need of protection from criticism, and which makes believers feel that no dissent should be tolerated…There are few as intolerant as those who preach tolerance…people who transgress politically correct beliefs are not seen just as wrong, to be debated with, but evil, to be condemned, silenced and spurned…Political Correctness is the dictatorship of virtue.

The combination of Western guilt and fear of racism has all but killed off the public concern about overpopulation in the last few decades. In the US, when population growth was caused by white people having too many babies, the country’s largest environment group, the Sierra Club, campaigned to control population. But now that US population growth is mainly caused by immigration, it has dropped all policies on population, and indeed its funding is dependent on never trying to tackle the immigration issue.

And of course, double standards. Ever wonder why it is illegal now in many jurisdictions to publish crime figures broken down by the ethnicity of the offender but racial data is collected by colleges for admissions and hiring processes that promote visible minorities? Or that “gender profiling by police forces that targets men is perfectly acceptable, while racial profiling which targets blacks is not?”

Browne observes that PC has fuelled a huge industry of charities and pressure groups that promote the PC world-view with no opposition, are fed by public taxes and are given endless uncritical air-time by the BBC. Migration Watch, on the other hand, which campaigns for less immigration to Britain, a position that has 80 percent public support, enjoys no taxpayer money and “is almost totally blackballed by the BBC.” Those groups whose policy aims might call for a politically incorrect solution usually shelve it.

The Council for the Protection of Rural England campaigns against house building in the countryside, but it would never dare tackle one of the main, and most easily tackled, causes in the growth in housing demand, mass immigration.

For Browne, shutting down debate to defend taboo policies does not dispatch problems but only allows them to fester and grow to explosive proportions.

The Netherlands has turned from one of the most socially cohesive countries in the world…to one where Muslim and non-Muslim communities live in fear of each other…political correctness undermined the functioning of its liberal democracy to such an extent that it was no longer able to debate and tackle serious and growing problems until the tensions were so great in society that they exploded.

Even one of Browne’s critics, Nick Cohen of the Evening Standard, conceded that the BBC fails to cover some inconvenient views, like those of African intellectuals who denounce the West for trying to assist Africa with development aid that merely lines the pockets of corrupt leaders. The debate over African aid never takes place. What Robert Fulford said of the CBC is apparently true of the BBC as well. It is “a herd of independent thinkers.” Browne would add, “Britain’s tabloids, so hated by the left, have actually been the torch-bearers for the truth by daring to write deeply uncomfortable things that others refuse to.”

When the media acts to insulate government from public opinion by filtering out proscribed thoughts government policy becomes unilateral and fundamentally undemocratic.

Despite the government’s official and the BBC’s unofficial policy of promoting mass immigration, opinion polls show 80 per cent of British think there is too much immigration. In almost all western countries, political correctness has undermined democracy’s ability to reflect public concern on this issue.

Browne has some prescriptions to defeat PC. Free speech could be protected with something like the First Amendment under the American Constitution. And Direct democracy — citizen initiatives — that would allow the citizenry to impose its will on the ruling class. He leaves his most important recommendation, however, to the last. It is a point that needs elaboration and warrants greater prominence than he has given in his book:

The emotional root PC must also be challenged. PC is founded on western guilt and self-loathing, which can be countered by more objective teaching of history and western values. Foundations can be set up to preserve and promote Western heritage and values.

Contempt for Western civilization and its values was epitomized by a student chant at Stanford, “Hey, Hey, Ho, Ho, Western Civ has got to go!” Cultural relativism, the notion that every culture is of equal merit, is the philosophical foundation of multiculturalism, now the code word for mass immigration. History courses are designed to induce shame rather than pride in our forefathers so that we may become self-flagellating penitents willing to see high immigration from aggrieved cultures as redress for our collective past crimes.

For me, PC began when I heard New Left guru Herbert Marcuse in 1969 quote from his infamous essay Repressive Tolerance where he justified withdrawal of toleration of speech and assembly from all groups and movements “which promote chauvinism, discrimination or oppose the extension of public services, social security or medicine.” My student colleagues clapped enthusiastically. “It is sobering that what began as an appeal for free speech at Berkeley in the sixties has ended with an equally fervent appeal by the Left for the imposition of censorship (at the University of Michigan)”, said Roger Kimball in Tenured Radicals.

The difference between the university I experienced in the late 60’s and the ones that followed a generation later is this: The students who were disrupting classes in my generation are teaching them now. They are the “tenured radicals” that Roger Kimball wrote about:

Efforts to dismantle the traditional curriculum and institutionalize radical feminism, to ban politically unacceptable speech…now typically issue from the dean’s office or faculty Senate, not from students marching in the streets.

And if the students of the late 60s and 70s did not stay on to become faculty, they became newspaper editors, television broadcasters, union harassment officers and CBC journalists. Somewhat like the Sci Fi movie Invasion of the Body Snatchers, these “pods” were all incubated and indoctrinated at university, then sent out to occupy positions of influence and power appearing as thinking human simulations. They look human, but they think like pods, giving you conditioned responses couched in PC Newspeak.

Universities are the boot camps for political correctness. Whereas you arrive at the US Marine Corps Basic Training Camp a wimp, and emerge eight weeks later a marine, you arrive at university uninformed, and emerge four years later misinformed. As Tammy Bruce said in The New Thought Police:

It is much easier to prep them in the closed environment of the academy, so that once they enter the real world they will accept totalitarianism as if it were a regular, everyday part of life.

We must confront and root out political correctness in its lair. We must return free thought to the universities and colleges. That’s where the rot starts.

Political correctness is a novel form of dictatorship imposed by those who affect self-righteousness. It is virtue in a jackboot, lodged in the faces of all those who dare to challenge prevailing doctrine. A societal poison so pervasive that it must be neutralized before it destroys democracy itself. Merely by speaking out, Anthony Browne and others like him are providing an antidote.