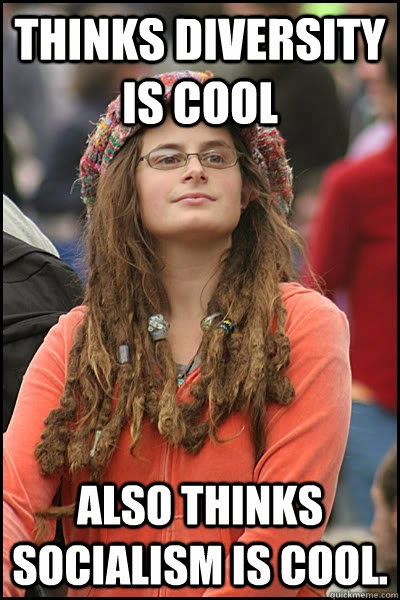 Before multiculturalism and diversity became the dogma of our times, before the 1970s, socialist parties and labor federations across the Western world opposed unrestricted immigration because it lowered wages and threatened labor union solidarity. Today, by contrast, socialists and leftists in general, are vocal supporters of immigration.

For a socialist today all criticism of immigration is “victimizing the poor”. Any genuine evidence of the harm caused by the importation of cheap labor to native workers is simply overlooked. One cannot convince a socialist of the lack of logic in their beliefs. Socialism is not a rational stance; it is merely a projection of an “underdog” self-image.

Leftists in the past had a strong sense of “wrong” and injustice; the difference today is that socialists hate their own culture and their own national heritage. They live with a sense of guilt and shame about the “wrongs” imperialist Europeans inflicted on the world, and a whole host of other wrongs such as the slave trade and the head tax imposed on Chinese immigrants in British Columbia a hundred years ago. Their sense of moral outrage comes with self-abasement. They have low cultural self-assurance, no pride in their historical past and very low self-esteem as an ethnic group.

Once that sense of low cultural self-esteem has become fixed, all else follows. One must believe that “sharing the wealth” is more important than protecting one’s native workers and environment from unchecked mass immigration and urban sprawl, although such “sharing” would only create universal poverty. If the entire world’s income were put into a large pot and redistributed so that each person received exactly the same as everyone else, the result would be universal poverty. If all farmland were redistributed evenly, there would still not be enough farmland for everybody. If I gave a billion dollars to the world, each person would receive fourteen cents. And after all such redistributions, the world’s population would still be heading rapidly toward another doubling of numbers, so any gains would be negated.

Current European generations must also believe that their own culture is intrinsically guilty of alleged crimes committed by prior generations requiring preferential treatment of current immigrants even though they were not the recipients of those alleged crimes. Of course, that is a belief those “other cultures” are always happy to agree with. And once that “guilt” has become established as “fact”, every piece of paper that appears in public must emphasize “redress” and “compensation” at all costs. Even entire years are not dedicated to “reconciliation” for all the wrongs Europeans did to the naturally good non-Europeans.

Leftists believe all cultures are, in some inexplicable way, equal. In their naivety, they cannot believe that many other cultures are cruel and intolerant, locked in the pre-literate mentality of a thousand years ago. In reality, even in most cultures of the present day the average person can barely read or write, contrary to the official figures on literacy. There are, at the same time, many petty tribes each of which regards itself as “God’s chosen people”. Westerners today cannot understand that there can be such vast differences between the mentality of one culture and another. The mainstream news-media foster this misunderstanding by failing to report the shocking statistics of rape, mutilation, murder, and other barbarisms that go on in this world.

Most people have little sense of history, yet cruelty has long been a part of that history. Beginning about 5,000 years ago in the Near East, various civilizations arose in Egypt, Babylon, Assyria, Persia, and so on. After a war between city-states, it was customary for all the male inhabitants of the losing city to be put to death, and impalement was one of the most common forms of killing. That ancient mentality has not entirely passed away. Yet Westerners like to fool themselves into believing that the entire world consists of naturally benevolent people innately predisposed toward equality and democracy so long as Europeans do not stand in their way with their prejudices. European nations can only be “enriched” by immigrants; the fewer immigrants, the poorer they are in culture and economic development.

Very few of these new immigrants are even coming from the European countries that built a world on a tradition of democracy, civil liberties, equality before the law, and the rule of law. Instead we have newcomers whose background is barbarism and cruelty, countries where dissidents receive a bullet in the head or have their hands chopped off. As a nation we have been brainwashed into believing that all cultures are in some mysterious sense “equal”, that sharia is in some sense equivalent to traditional European law, that a religion that proclaims death to infidels is roughly the same as one that teaches us to treat all humanity as beings of nobility and grace. All of this, of course, our descendants will have to pay for.

To a socialist today, bringing European nations down to a level that is comparable to the non-European world is just.