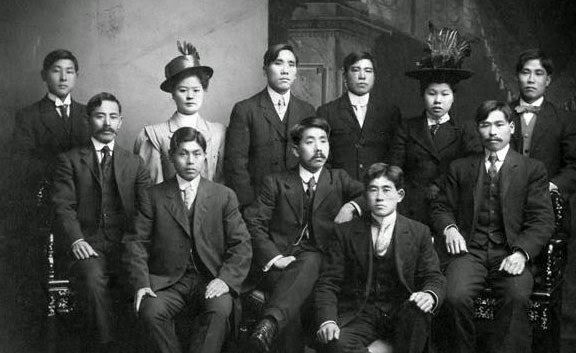 Raymond Louie, a Canadian with ancestry from China, currently serving his fourth term as Vancouver City Councillor, has urged council to direct staff to investigate discriminatory laws and policies imposed by Whites on Chinese immigrants in the city between 1886 and 1947, in order to come up with recommendations for “reconciliation efforts”. He says that apologies and payments by politicians for the head tax are not enough. A complete review or “research” investigation of the sufferings inflicted by Whites upon the Chinese — “as long as it takes” — is required. The media reported on May 22, 2014 that Louie has set a motion to go before the city council next week on this matter.

This motion by Raymond Louie comes in the hills of BC Premier Christy Clark’s apology to Chinese-Canadians on May 15, 2014. Christy Clark expressed deep sorrow and regret “for the provincial government’s historical wrongs” from 1872-1947. With great solemnity, contrition and sense of historical rectification, this apology was fully endorsed by Clark’s Liberals, the Opposition New Democrats, the Green party, as well as Independent members of the legislature. There was no dissent.

It was not enough that, in 2006, Prime Minister Stephen Harper’s government had already apologized and made payments of $20,000 each to Chinese-Canadians who paid the head tax or their surviving spouses.

Chinese Reaction to the Motion — It is not Enough, Whitey!

The Chinese understand “white guilt”. In fact, immediately after the BC government apologized, Chinese leaders said it was still not enough and rejected it. The Chinese Canadian National Council and the Head Tax Families Society of Canada both “declined” the apology. Apparently, they are dissatisfied with an apology that has been tainted because a Liberal government document surfaced last February suggesting the party would attempt to gain “quick wins” at the ballot box in May by issuing formal apologies to ethnic communities for “historic wrongs”.

“A government should never be seen to be profiting from racism but this is what has happened here today”, Victor Wong, executive director of the Chinese Canadian National Council, said in a release. Sid Chow Tan, president of the Head Tax Families, added that “most of these apologies, I take with a grain of salt”.

They want, in the words of Wong, “an absolutely genuine apology”, one that includes “financial redress”. According to Tan, $8.5 million of the $23 million in total head-tax revenue went to the B.C. The $8.5-million “tax grab” (worth more than $800 million today) should be “symbolically returned” to families that suffered hardship.

They also want “inclusive redress”. What does this term mean? Neither Wong nor Tan elaborate. The media, too, never explains. Yet this term goes to the heart of what the Chinese are asking for in the long run. It means redressing past wrongs by elevating the cultural status of those groups to whom wrong was done. It means that Whites today — who had nothing to do with the head tax — should offer both financial and cultural reparation to the Chinese (today) who did not suffer any discrimination but may well have arrived from China a few days ago.

“Inclusive redress” can be categorized as a White-created cultural Marxist term employed by Chinese cultural nationalists to promote their ethnic interests in Canada. The Chinese want the Canadian government to make the history of White discrimination against the Chinese a central part of Canada’s curriculum, and beyond this some Chinese leaders are calling for the inclusion of Chinese Canadians as founders of the Canadian nation.

Chinese leaders in Canada are not always straightforward, but one may get a sense of the ultimate goals behind the ongoing demands for apologies from the writings of Henry Yu, history professor at UBC. He said that the 2006 apology by the Federal government was “just the beginning”.

In an Op Ed piece in The Vancouver Sun (2 February 2010), he claimed that the English language “stunts diversity”. Calling it a “colonial” language, he demanded that Asian languages, long “silenced” by “white Supremacists”, be given the same official status. He even equated the presence of a high number of whites in leadership positions with “the legacy of a long history of apartheid and white supremacy”.

This is the context in which we should judge the motion set by Vancouver Councillor Raymond Louie. He said there’s no timeline associated with the motion, but wants the process to extend “as long as it takes” for a complete review of the issue. “For our staff to complete this, I want them to take the appropriate time to do it right.” He wants a full scale investigation of every instance of discrimination against the Chinese from 1886 to 1947.

Redress also means re-imagining the history of Canada in such a way that white Europeans are portrayed as oppressors and non-Whites as victims with the goal of taking Canada away from the Europeans and transforming the nation into a multicultural and multiracial society. As the Asian Anushka Nagji put it at a Consultation Forum on the issue of redress this past January 2014: “The story of Canada is not a tale of brave European explorers and a vast untamed wilderness. It is a sordid tale of genocide and colonization, unjust laws, racism, oppression, and exclusion.”

The Europeans must not only apologize but admit that their history is a sordid tale of genocide, and then hand over the lands in which this “sordid exclusion” was played out to those who were excluded.

Never mind that Clark did announce the government would put $1 million into a legacy fund that would be used to fund educational initiatives. Never mind that countless studies have already been published by White academics on the head tax and “racism”, and that every child from primary school onward is encouraged to think positively about the “hardships” and “enormous contributions” of Chinese immigrants.

“The research by our staff will yield”, according to Louie, “many surprises for many of our people today on just how egregious some of these initiatives were, and do its part, I think, on what I hope is to educate people on what had happened in the past and learn from the past.”

In what is yet another Chinese leader of another organization dedicated to the head tax, Bill Chu, founder of the Canadians for Reconciliation Society, has indeed suggested that BC should do more to educate the broader public about historical discriminatory policies. “If people don’t know what you’re apologizing for, they probably will reject it outright.” Chu noted racism was once “endemic”.

“There’s no city that really escaped it.” Apologies, financial compensations and inclusive redresses should be coming from all the cities of BC. “For example, the no-Chinese clause, meaning Chinese would not be employed by the cities,” he stated. “That was a provincial thing, but it trickles down to municipal levels.”

A Brief on the Real Historical Facts

The insanity of all this apologizing and redressing is that no one has cared to conduct a proper historical study of the events leading to the implementation of the head tax. Dan Murray at Immigration Watch Canada is one of the rare few who has challenged the official cultural Marxist version of the events. According to Murray, “the conventional wisdom that the Chinese were victims of persecution by the B.C. government or Canada’s federal government is incorrect.”

It is worth quoting in full the key point Murray arrives at:

Most of the Chinese who came to Canada from 1858 to 1900 arrived in British Columbia first. Most of those who stayed in Canada, stayed in British Columbia. The Chinese Head Tax and Chinese Exclusion Laws were predominantly British Columbia issues. Well over 10,000 Chinese came here as temporary railway labourers in B.C and were supposed to return to China. Chinese labour contractors brought many more thousands here in the 1880’s and 1890’s as surplus labourers (in some cases as strike breakers), but in general as competing/replacement workers). Chinese contractors and certain businesses used Chinese labourers to compete with host population workers for employment and to replace host workers where possible .

The inflow angered people of all political stripes in the host B.C. population. The main complaint was that the Chinese would work for less than the wages paid to members of the host population. The vast majority of B.C.’s population supported provincial legislators who passed a litany of laws
(1) to limit the numbers of Chinese immigrants through the use of a head tax or
(2) to end Chinese immigration completely.

I welcome anyone to challenge this version of the events.