Canada Is Not Vacant Land 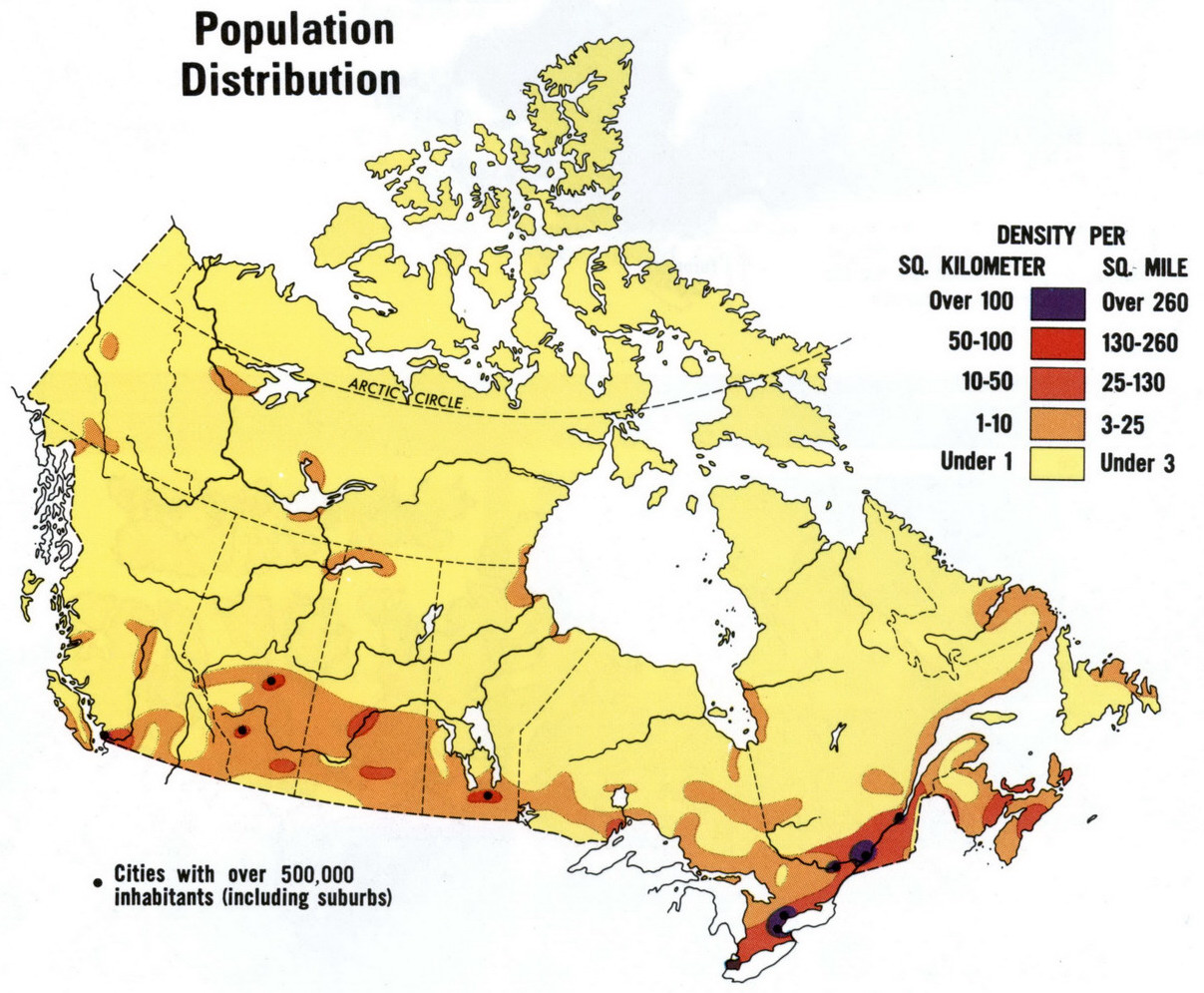 It is a common misconception that Canada has vast amounts of land that could support large numbers of immigrants. Much of this belief is due to a failure to understand Canada’s unique but rather daunting geography. About half of the country is bare (or, at best, spruce-covered), uninhabitable rock, namely the famous Canadian Shield.

But bare rock is never “underpopulated”. It is the border strip, 150 km wide, which is demographically the most significant part of the country: 80 percent of the population lives in this area. In contrast, Canada’s largely uninhabited 5 million km2 of bare rock, the enormous area north of that border strip, has winters of unearthly cold stretching out over the better part of the year, with snow reaching to the rooftops, and the remainder of the year is characterized by dense clouds of mosquitoes and blackflies. The general impression is that Canada is an “empty” land, just waiting to get filled up. In reality, at 35 million the population is now nearly three times greater than in 1950.

Because only a certain amount of the country is livable, Canada is already well populated. There is simply no need to continue our mad rush to fill the country. Thanks to dishonest politicians over the years, Canada is tied only with Australia in having the highest immigration rate of all industrialized countries. Canada also has many economic problems and is unable to provide adequate employment or other support for the people who already live here. A large increase in population is not a solution. In fact, in a world that now has a total population of over 7 billion, an increase in population is never a solution to anything. Yet, unlike many other countries, Canada has no political party that will take a firm stand against excessive immigration.

Canadian multiculturalism, designed by Prime Minister Pierre Trudeau in 1971, is harmful partly because it fails to include strategies for integration, such as a requirement of proficiency in an official language before citizenship is granted. Multiculturalism as we see it today — measured in terms of the quantity of bodies — simply results in enclaves, ghettos, gang warfare. Each culture fights every other one. About 85 percent of recent immigrants have neither English nor French as their first language.

Multiculturalism also leads to cultural relativism. Canadians of European extraction are now taught to believe that there is no such thing as barbarism, only “cultural differences”. We forget that there was actually a point to the long centuries of struggle in the West that fostered democracy, civil liberties, and human rights. Yet we bow to medieval mentality on the assumption that we are otherwise “racists”.

Immigrants displace Canadian citizens in the job market, even though unemployment these days is already very high. They also add greatly to the costs of “free” medicine, education, legal advice, and all the other perquisites of the welfare state. In part this is because the immigrants of modern times often lack both language and education.

Trudeau’s invention is destroying the country, and to speak against it is regarded as sheer heresy. The Chinese are by far the biggest immigrant group, and Vancouver is now an Asian city. But it is not only numbers of people that matter, because there are other ways of changing the country. Money from Saudi Arabia has insidious effects, and Muslim obsessions with “sharia” (Muslim law) corrode basic Canadian values. According to the highly respected journalist Robert Fisk, about 20,000 Muslim women every year are the victims of “honor killings” by their own families, but when Canadians hear such accounts they fail to believe them: if such a story did not appear on last night’s television it cannot be true. Yet I spent three years living in the Middle East, and I know that much of the world is far uglier than is imagined by most Westerners.

As an English teacher, I would sometimes have to advise immigrant students against infractions of Canadian laws, including those regarding assault, but my students’ rationale for any moral or legal infractions was always the phrase “in my culture” (or “in my country”). Who, specifically, is teaching newcomers such expressions? Politicians are quite aware that “culture” is not a valid catch-all phrase, but they don’t seem to care. After all, a higher rate of immigration means more votes, and more customers, and more sweatshops.

Until the creation of multiculturalism, freedom of speech and the press was an age-old right. Now, however, it is a crime to say anything that offends any group of people, because one is said to be attacking “human rights”. A charge of this sort is a a circular argument: what is offensive is defined in terms of the claim of the other party to feel offended. It’s like a charge of witchcraft: whatever you say, your statement can be turned around to “prove” you are guilty. The similarity between the twisted logic of Trudeauism and that of Stalinism (not to mention the Patriot Act and subsequent American legislation) is curious, but Orwell described such “thought crimes” long ago in 1984.

It’s easy to understand why the inhabitants of the less-pleasant parts of the world have their eyes on Canada. The most significant result of Communist policy in China was famine, and the worst famine in all of world history was that of Mao Zedong’s “Great Leap Forward”, 1958-61, when about 30 million people died. Now hunger is again looming in that country. China’s arable land is in decline, and about 600 km2 of land in China turns to desert each year. China has once more outgrown its food supply: the ratio of people to arable land in China is more than twice that of the world average, which is already too high to prevent hunger.

China is the world’s leader in the mining or processing of quite a number of natural resources: aluminum, coal, gold, iron, magnesium, phosphate, zinc, and rare-earth minerals, for example. Yet basic energy reserves are in short supply. Although China has about 20 percent of the world’s population, it produces only about 5 percent of the world’s oil, it uses up coal so quickly that its reserves will not last beyond 2030, and the country’s pollution problems are terrible. And China’s “booming economy” is based on devalued currency, counterfeiting, and what is virtually slave labor.

The “fossil” (deep) aquifer of the North China Plain is being depleted, although fossil aquifers cannot be renewed. Yet this aquifer maintains half of China’s wheat production and a third of its corn. As a result of the depletion of water, annual grain production has been in decline since 1998.

China now imports most of its soybeans, and conversely most of the world’s soybean exports go to China. But China may soon need to import most of its grain as well. How will that amount compare with their soybean imports? No one knows for sure, but if China were to import only 20 percent of its grain it would be about the same amount that the US now exports to all countries.

Saudi Arabia pours money into the West for the purpose of “education”, and many Western academic institutions receive grants from Saudi Arabia, or programs are set up with Saudi funding. At the same time, the numerous mosques in the West serve as training grounds for young Muslims who live in those countries. Mosques are springing up everywhere in the West, yet in Saudi Arabia the building of a Christian church incurs an automatic death sentence. Contrary to popular opinion, there is no such thing as “moderate Islam” versus “radical Islam”: Islam comes in only one form, the one that was invented in the seventh century.

The misunderstanding of the vast difference between Muslims and Christians might be due to the fact that the debate is assumed merely to involve the respective merits of two religions. Yet this assumption is wrong on two counts. In the first place, Muslims regard it as self-evident that Allah spoke first to Moses, then to Jesus, and finally and most clearly to Mohammed: for Muslims, therefore, there is no possibility of a “dialog” among various religions. The second and more important reason why it may not be entirely logical to compare Islam and Christianity is that the former is, in some ways, more like a political movement than a religion. Every major religion has at times done some proselytizing “at the point of a sword”, but that has always been more true of Islam. The term “jihad” (“religious warfare”) is not a metaphor.

Time to Wake Up

The general public in Canada has become accustomed to submission and therefore remains mute. Unlike other people, most Canadians are never satisfied until they are feeling guilty about something. There is a constant undertone of “moral inferiority” being applied in Canada to people of a Western heritage. One must never mention Christmas, although one must portray a false joy toward the festivities of any other culture. One must constantly mumble and fumble in an attempt to find correct terms for various ethnic groups. Even the terms “B.C.” and “A.D.” must be rewritten as “BCE” and “CE”. All of this is absolute nonsense. To be convinced of one’s own inferiority is nothing more than to accept that some other person is superior — which is exactly what manipulative politicians are planning. It is time to wake up. Those who do not respect themselves will not be respected by others.